The “Vochol” is a mix of indigenous Mexican culture “Huichol” along with iconic pop culture, the Volkswagen (VW) Beetle. The term “Vochol” is the contraction of Beetle; Mexican slang that refers to the traditional VW car, whilst “Huichol” relates to an ethnicity of the Sierra Madre Occidental of Mexico.

This car has been an ambassador of Mexico since its creation in 2010 by the Museo de Arte Popular and its non-profit arm, the Asociación de Amigos del Museo de Arte Popular, hand-in-hand with the governments of the states of Jalisco and Nayarit and other public and private entities. The project is the result of the work of eight “Huichol” artists who spent more than 9,000 hours and used almost 2.3 million colorful beads to create typical Mexican folk motifs both inside and outside of the vehicle, their canvas.

This innovative project demonstrates the artistic ability of the native cultures, captivating all visitors with its enigmatic beauty and essence. Alongside this, the original design of its parts illustrates powerful symbols, milestones and stories from the deeply spiritual culture. “Huichol” art is an expression of faith and belief, which evokes centuries-old shamanism and peyote rituals  that is still practiced today.

The stunning juxtaposition of modern machinery is decorated with bright, psychedelic patterns and colours, over 90 kilograms of beads and approximately 15 kilograms of fabric, paint, wool and resin. These materials adorn the vehicle’s chassis and interior, including the seats, steering wheel and dashboard.

This art on wheels is a symbol of friendship between Mexico and each and every country that it has travelled to, including the United States, France, Germany, Belgium, China, Spain and the United Kingdom. And it will just keep on going. 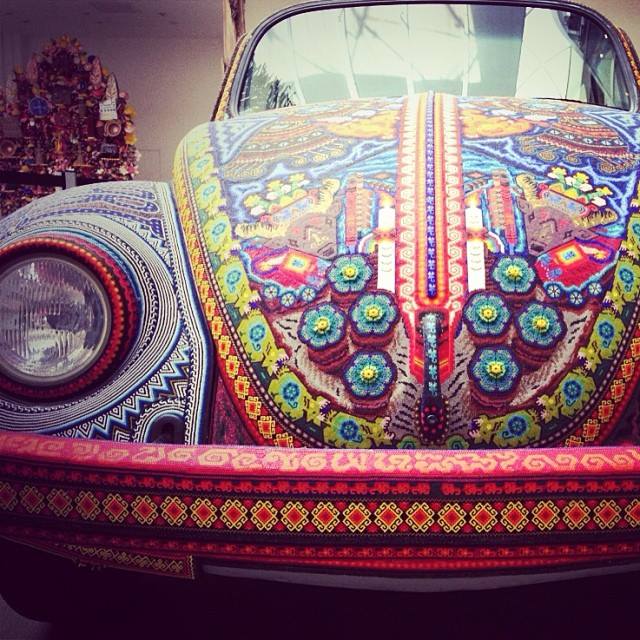 Creativepreneur based in Mexico City, Gabriela has a BA in Communications and Advertising with a minor in Film and TV from Bond University, Australia. She is studying Entrepreneurship at the Massachusetts Institute of Technology. Gabriela is also contributor for one of Mexico’s top newspapers, an Associate Producer for a Film and TV production company and Patron Fundraiser for the main folk art museum in Mexico, the Museo de Arte Popular.